I recently purchased a CODE25 to use as a practice amp. It looked like something fun I could play around with.

The first few days it was ok as I was only using some of the factory presets. Trouble started as soon as I edited one or saved an online preset. The sound dissappeared (speaker) and the display got very faint. Restarting the amp made the display ok again but still no speaker sound. I reset the presets (hold down Amp while turning it on) and that seemed to do the trick.

But soon after the sound issue started again. I reset the amp presets, re-installed the firmware, but I only had sound for 2-3 seconds after boot, then nothing.

I have now discovered that if I plug in a headphone (which has sound) and then unplug it, I have speaker sound again. This makes me even more confused. I haven't tested long enough to confirm that this will work over time.

I see that there is a lot of posts regarding sound issues and requests for a long overdue firmware. But have anyone found out any new tricks to overcome the issues?

I sent an email to Servicedesk last week but haven't recieved a response of any kind.

Marshall Code50 - no sound after 15-20 seconds of plugging in

I purchased a marshall code 50 in the USA from Guitar center in Jan of this year. Now, there is an issue where the sound from the amp speaker cuts off after 15-20 seconds of plugging my guitar in. I can still hear the guitar if I use any headphones. Upon contacting the store they suggested to contact Marshall directly since there wasn't a specific type of coverage on the amp I purchased. So my question is how can i contact marshall USA to get this resolved? It doesn't seem super straightforward to find their info online. Any help would be appreciated.

How to lower system sound (power on & shut down) volume

How do you control system sound (power on & shut down) volume on Emberton?

The system sound is VERY loud, and aggressive sound.

It's silly when you hear relaxing yoga music, and then you're forced to hear very loud guitar sound at the end of the meditation session.

connecting issues with my Stanmore II

Great sound in the speaker, untill the problem drops my mood by constantly losing bluetooth connection

When playing music by radio or spotify, the Stanmorgen is constantly ínterrupted by the and losing repeatedly conntection and then repeates starting/pairing sound (e-guitar chords) which now is changed into an annoying repeatedly sound.
Feels like some device is trying to connect with the speaker.

Problem is still there and is more than annoying.!!

The Stanmore II at firtst returned to the store and the send it back for repare, but not sure if there was repared anything?

In Code 100h manual, says the speaker output is MINIMUM 8ohms load. I can use my 16 ohms cab without harm the amp head or the cab itself?

I'm getting trouble in the 4x12 transportation, the 2x12 is way lighter. Until now I'm only using the 8Ohms cab in the code 100h.

My Stanmore 2 speaker keeps turning off & back on again (sound plays and indicator lights go on & off) when playing vinyl through the RCA or AUX. Very annoying. No problem when playing on Bluetooth through my iPhone. Any ideas please?

I have the following problem with my Marshall Stanmore (I) Bluetooth speaker:

Whenever I am wirelessly connected, the Bluetooth connection drops after 20 minutes — while playing music!

The surprising thing is that it not just happens randomly after 15 to 45 minutes — no, it happens suspiciously regularly after 20 minutes. I went and tested this with my laptop (4 times) and my phone (3 times) by writing down the start and stopping times, and the Bluetooth connection got interrupted (the music stopped) after 20 minutes each time. 7 times in a row. No exception.

• Yes, I have removed the speaker from all devices, then re-repaired them. Multiple times.

• Yes, the problem exists with all my devices that can send sound via Bluetooth (laptop, phone, desktop,). Those same devices have no problem to stream music to my Sony sound system or portable Bluetooth speakers. The problem only exists with the Stanmore.

• Yes, I have had the Stanmore disconnected from power for an hour. Even a few days, actually.

• Yes, sound works perfectly fine via the wired connection (INPUT 1) and it doesn't stop after 20 minutes.

• Yes, the "STANDBY MODE" switch on the back  is set to "STANDARD". (But surely no Bluetooth speaker would ever go into standby mode WHILE playing music anyways, right?)

• No, I am out unfortunately of warranty. The speaker looks great and hasn't been used that much. I also find that it financially doesn't make much sense to spend 130€ (max.) on a Marshall OOW repair.

• No, the Stanmore I is not compatible with the Marshall Bluetooth app, and there is no way for me to update the firmware (as far as I know).

• Yes, I can absolutely open up the speaker and post pictures of specific components, if someone has a clue about what capacitors or chips to look out for.

Additional info on the issue:
I experience no problems connecting via Bluetooth, from any device. I can start playing music — but after 20 minutes, the music will automatically stop. If I am streaming from Spotify for example, the player will just pause. The Stanmore stays powered, and the red BLUETOOTH light on the Stanmore is still on, but it appears a little dimmer than normally. I have found that pressing the SOURCE/WAKE button once usually wakes up the Bluetooth connection again, and then after a while, I can resume music by un-pausing on the laptop or phone.

Thoughts? Ideas?
The fact that this happens after a very precise operating time, sure sounds a lot like it could be standby-related. But the Stanmore is not set to POWERSAVER mode. And even if it was, it would only enter standby mode after a certain time if it wasn't playing anything. A speaker that goes into standby mode every 20 minutes WHILE playing music ... that would be ridiculous! And yet, that is exactly what I am dealing with.
Any ideas or clues for what to try or look out for?

Code 100 Head. No output to speaker cab only headphones.

As title says I have no output to the speaker cab. All I hear is a very quiet fizz/hum. Output to headphones is fine. Only arrived today and will be going back Monday unless I can resolve this. Code 2x12 cab seems fine and tried three different speaker leads. Gutted as I was so looking forward to getting a full weekend on this before going back to work.

Code 25 stops producing sound from the speaker after it gets warmed up.

I heard a sizzle type of sound one day. I didn't think that was a good thing so I turned the amp off.  The next day I began to play and once it got warmed up, sound stopped coming from the speaker. I can shut it off, let it cool down and it will play once again for a few minutes and then it stops again. I have owned the amp for a couple of years and never had this problem before. Is this a common problem? Suggestions?

My Acton II Bluetooth speaker is connected to my iPhone. Playing internet radio is working fine, but when I try to play Spotify the music stops playing after a second.

Can you help me out?

Can i use an emulated out with the cab speaker plugged in?

Change the "blue tooth" name of my speaker

Hi. I have two Marshall Acton speakers in my home, which I very much like. The problem is that they both have the same name when searching for them to cnnect via bluetooth on my phone, which can cause confusion, especially if I'm in range of both of them. How can I change the naming convention that one of my Acton speakers uses so I can differentiate between them?

Emberton Bluetooth pairing does not work

So I've got a new Emberton speaker, but it won't pair with my Android phone (OnePlus 7 Pro). Bluetooth light is blinking and "EMBERTON" appears in the bluetooth device list, but all pairing attempts only result in "Can't communicate with EMBERTON". What can be done here?

Want can be the best model ?

I'm getting some alerts about my Marshall speaker reaching out to 172.217.13.228.  Any idea what this address is used for?  I also see a lot of vulnerabilities reported against this speaker from bitdefender.

Hi Marshall Team, I have just bought a Stanmore 2 which I have been able to link to my mobile phone which is a Samsung Galaxy A71.

However I have found it impossible to pair my Apple iPod Touch (6th Gen) unit. When I try to start and play the music in the IOS player it merely plays via the iPod speakers not via the Stanmore. I have tried forgetting the device, manually restarting, resetting network settings, putting Bluetooth off and on and other probable corrective scenarios.

I would appreciate any help you can provide as don't know what to do next.

If there is no solution I will have no option other than to return the speaker to the shop.

My device has stopped turning on. I decided to fix the device. When I opened it, I discovered that the PCB is not like the boards of other devices that can be found on the Internet and in videos about disassembling the speaker. In addition, the PCB labeled "Stockwell" was not in the assembly at all.
Has anyone met devices with such PCB before? Is there a schematic diagram of the device or this board? What are these U11 and U12 chips on the board "JY-SPK-V7.0"? 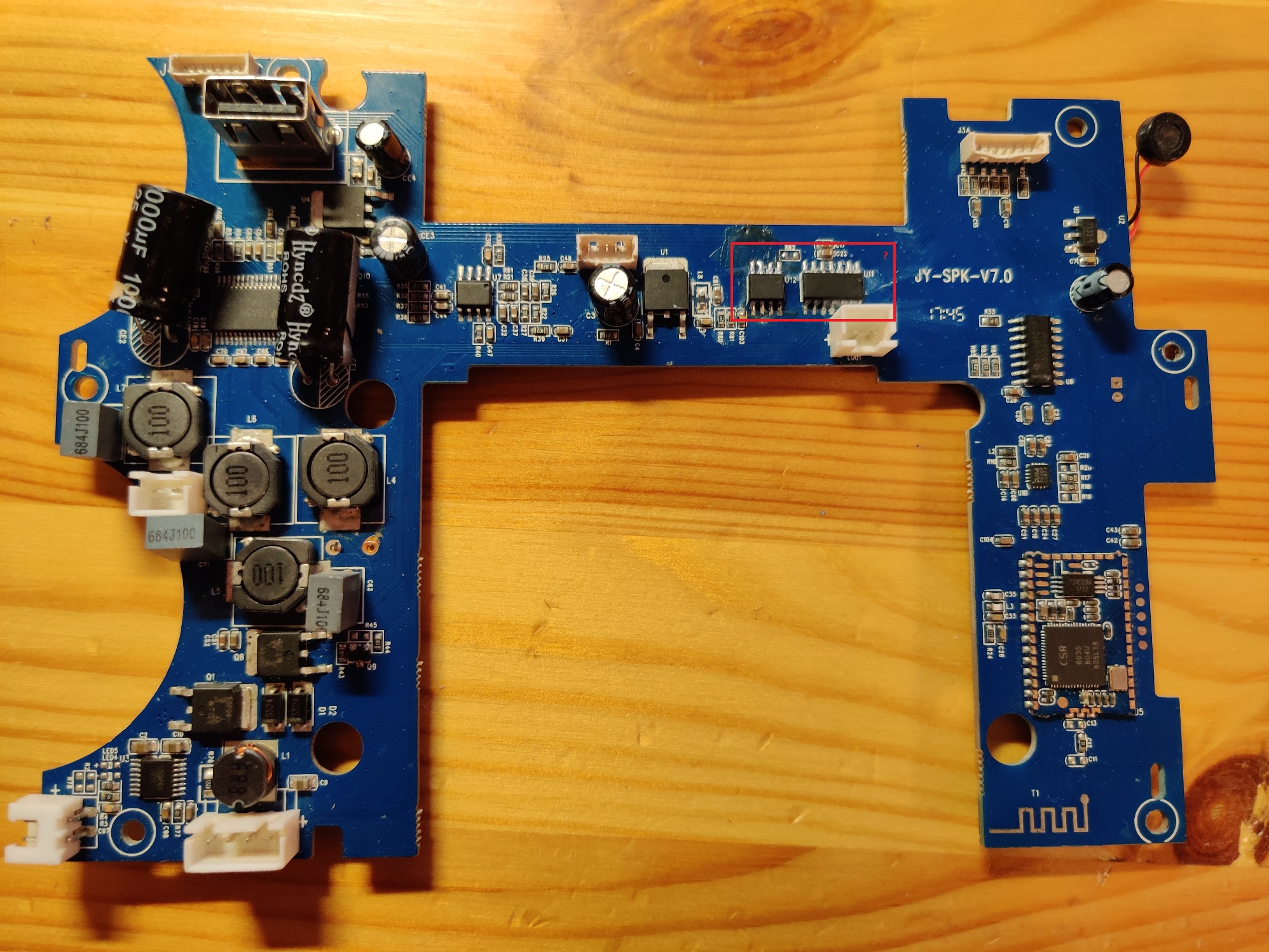 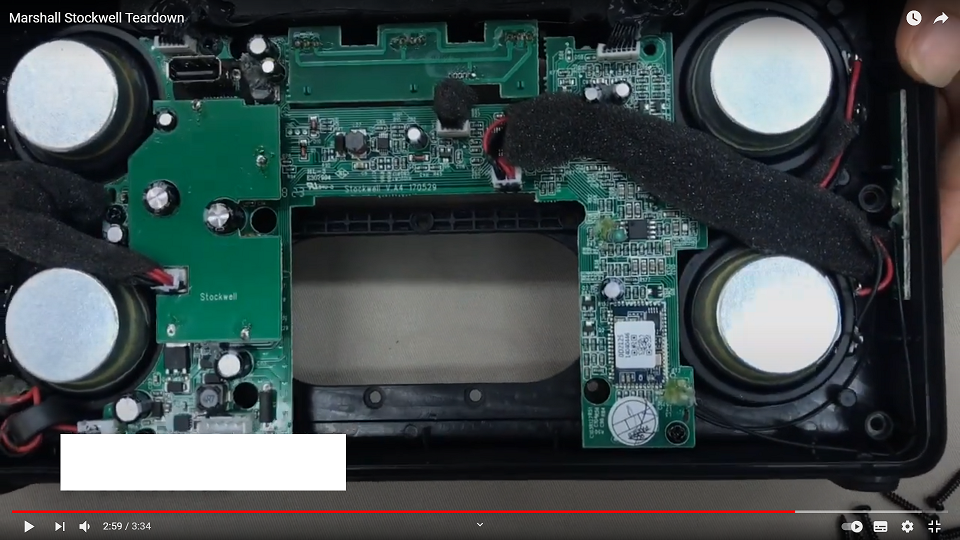 Marshall Origin without a speaker

Hi, I'd want to know if disconnecting the speaker on a 20w Origin head would activate the standby (so this won't damage the amp) even if then I go through the send to an audio interface and not returning to the amp through the return or anything else (and so NOT using the di out). In fact I would like to use my favorite cab+microphone+power amp simulator and then connect it to the interface and listen with my headphones on and I think it would be impossibile and harmful to the sound to add another cabinet simulation to the already-present One in the di out (right?) and so I would exit from the send.

could i do this with a combo, too? In that case, how do I disconnect the speaker?

Sorry for my bad english and for the ignorance😅