Quite a few people on various forums are concerned about the emulated out of our DSL20H and DSLCR amps. It seems that there is a set level for the emulated line out and headphones which can only be adjusted with either the guitar volume knob of gain channel knob. The channel volume does nothing to the line out/headphones only to the speaker output.

Is this normal behaviour? Where the gain knobs are the only controls on the amp that increases the loudness of headphone/line out.

I was just wondering if Marshall is working on a new firmware update for the code series amplifiers and if so when could we expect it to be released?

I'm trying to figure out how to use tap tempo on the footswitch with my marshall CODE amp.

As I understand it, I should be able to "stomp" in the tempo of my delay via the footswitch.

I have no idea how to do this though.

I've noticed that my amp makes a fizz noise in any volume even without any cables pluged in.

Another people here already complain about this issue, it seems like a design problem.

Is there a way to solve that?

Will Marshall provide a way to increase the headphone volume as is very low against all other devices we use such as iPhones, PC DAWS etc, so makes it very difficult to practice without disturbing the household and neighbours...

One of the most potentially apepaling feature of the CODE amp system, the ability to change and store settings with bluetooth technology from my iphone, simply does not work. How does this sor tof problem reach ghe masrket in the first place. And MArshall's response, "We're working on it" for over a year is not reassuring.

Marshall:  How about an honest response like, "it can't be fixed" or "an update will be launched in the next 30 days" ?

What setting do you use to get the Code 50 to act as a amplifier/speaker with no modeled effects?

I've noticed that there is rattling/jangling coming from the amp (not the speaker) when playing notes between low  A and C and their respective octaves above. It sounds like it is coming from the EL34 valves - is this due to the way that they are mounted without spring dampers? They have not gone microphonic as far as I can tell, and are otherwise performing as expected, so I feel this is more a mechanical issue with the chassis/mounting, or it's just an undesirable characteristic of the valves themselves. What I'd ideally like to know is, do all Origin 20Cs do this or is this the first anyone has heard about this?

I've removed every external variable there could be, moving the amp to another location and isolating it from floor vibrations in the studio. I've taken the 'amp' out of the cabinet so that I could lightly tap the valves, and check the screws around the supports are not loose. You can generate the rattle (or very similar) just by tapping lightly with the handle of a screwdriver, on both valves. This is what I was expecting if it was just physical vibrations from the speaker causing them to rattle in sypmathy. The rattling sound does not get amplified, so it's not in the audio path.

It's enough to be offputting when tracking/practicing in the studio unless pushing out really high volume so that you can only hear the guitar. I play fairly clean a lot of the time so it is more obvious under those conditions.

Would really appreciate some advice. If the answer is, "It's the same for all and there's not much that can be done..." then ok, I just need to know. That said, I spotted there was some sort of similar issue perhaps on Class 5 amps that a kit was developed for to resolve? I may have misunderstood though.

If there is any further mechanical troubleshooting to be done then please let me know. I wouldn't want to void the warranty status if possible. For what it's worth, I'm a systems and support engineer for a large format mixing console company, so I'm competent enough to poke around as required... just figured someone may have alreday solved this one before I carry on!

I just got a JVM 205H ,used ,, but the footswitch on 1 &2 stay blue and I cant seem to switch to the green yellow or red  modes . I have the manual but I cant seem to find anything about a blue led on the footswitch. I tried to do the reset on both the head and the footswitch but the blue light and the problem is still there . anyone whats up with that?

Hi all! I'm a very pleased user of a CODE 100 combo. I'ts a quite wonderful tool for those that cannot achieve a Boutique or Vintage tool.

Until this time I used it at home mostly with Headphones, due it's power is very high to set it for speaker use.

But this weekend we had an oportunity to use it on a live presentation. That day the amp showed some problems using the speakers: In the middle of the presentation it suddenly lost volume, staying turned on. Obviously it was a very unconfortable situation, and my only reaction was to turn it off and on after a few minutes. This failure happened at least 5 times.

There are many supositions I made about this issue, before sending the amp to my dealer:

1)  The voltage mains was under very high fluctuation values.

I'll check the amp and see if this problem is still happening. Do you have any other diagnosis/solution to tell me? I'm very worried about this problem

Thanks in advance to all,

Hi! I'm in the process of restore an empty 1x15 cabinet from 1973, model #2054! I'm trying to decide if I'm going to use it as guitar cab or a bass cab. If I decide for the Bass cabinet, due to its internal measures and specifications, what speaker do Marshall sugest?? I don't know if Back then The company's were preoccupied once studying the dimensions of the cabinets and eventual ports/reflexs versus speakers best performances .. but if so, what is the optimal bass speaker for this cabinet?

Im going to try attach a photo of the refered model :) 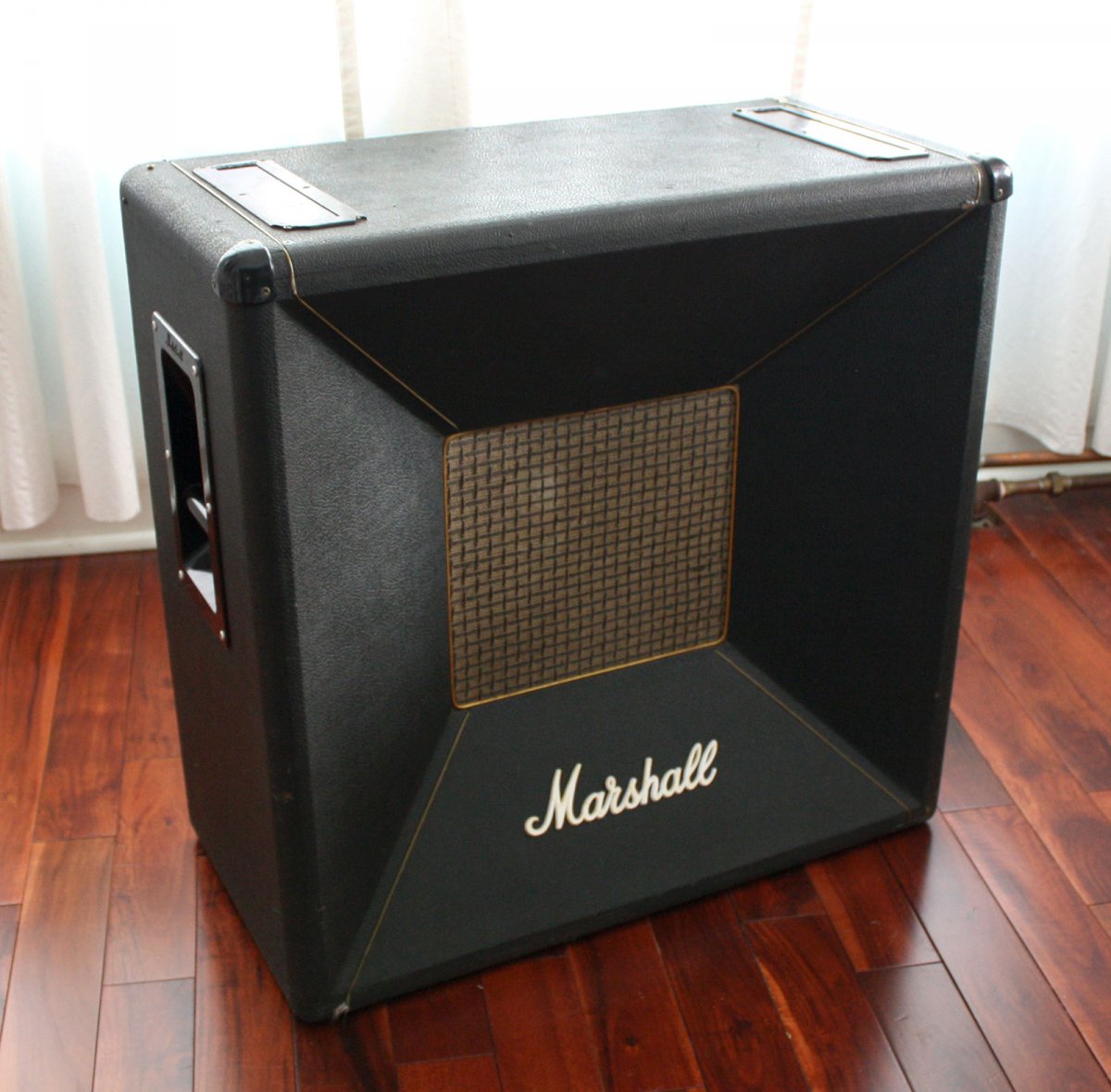 Any help is much appreciated!

Does anyone know how I can get a user's manual for an old AS50R?  I'm not having luck going to the commercial manual website services and I can't find anything on Marshall's own website.  Thanks.

Does anyone have any suggestions on how to achieve that “Bridge Of Sighs” tone? I’m using the Code 50. Thanks.

how to use two cabinets with a code 100h head

i want to know if there is a way to use a second cabinet with my 100h head and 4X12 cabinet so i can have a full stack vs. a half stack?

No sound after a couple minutes.

I love my Code 50 amp but lately, it's having a problem where there is no sound coming out of the amp after a couple minutes of turning it on. The only way to fix the problem is to turn it off and on. However, this only fixes it for a couple minutes. I've already instaled the latest firmware.

I just purchased an Origin50H in the USA. What brand of valves (tubes) do these amps ship with? Any info would be helpful. Thank you!
Tubes

How do people manage their presets?

I've just bought a CODE100 - what a beast!  I haven't moved on from playing with the existing presets yet, but I'm starting to think about how I'm gonna manage them when I do start building my own.

First of all, a mini-rant.  I can't believe Marshall gave us 100 existing presets, but force us to overwrite those if we want to save our own.  It's 2018, surely they can afford the few K it would take for an additional 100 presets?  In fact, I'd be happy with a bank of 20 user-preset spaces!  I owned a Zoom pedal board 20 years ago that was better than that!

So in an ideal world, I want to retain as many of those presets as I can, but make some room for maybe 10 of my own.  I've already identified a couple I can lose (Virus and Nightmare).  However, I don't want to have my new presets scattered about as I replace odd ones, I want them all together, ideally in slots 00-09.

So what's the easiest was to shuffle the rest of the presets around to make space in the first 10 slots.  And also, what other strategies have people employed for organising their library?

I guess with Marshall being a small company without much expertise in building amps, this should be expected.  Maybe once they've been around a while and get the hang of building amps then they'll be able to release products that work as advertised and that they are also able to maintain and provide support for.

Hang in there Marshall, you'll be a good amp company someday!

Loving my code 100h, surely marshall will be creating more stomp boxes in future, can code users expect updates to the fx chain?