Please read this post in the spirit in which it is posted.

I monitor these forums regularly as I have five Marshall CODE amps. and I guess I like to see what's going on and stay up-to-date.  And I suppose I enjoy sharing my knowledge and helping others where I can.  I must also note that I've not had any of the issues described on these forums with any of my CODE amps.  And I must also note that I think they're the best modelling amps. around i.e. they're Marshalls and enough said.

But what concerns me (and hence this post) is this: there really does seem to be a lack of interest on the part of Marshall Amplification when it comes to the CODE range (at least here on the forums i.e. if emailing Technical Support yields different results then I do apologise) (and given the fact that I've had no issues at all with any of my CODE amps., as noted above, I've never had to contact Technical Support so I would not know).  It's almost as if Marshall regret the day they got into this modelling business (and if that's not the case: sorry but that's my personal impression at the moment after, what, around eighteen months or so of monitoring these forums???).  I mean to say: there are so many posts around here (dating back) asking for feedback re: apparent bluetooth issues, projected dates for new firmware updates, etc. etc. etc.  And no answers.  There's even been one or two posts asking if Marshall is going to continue with the CODE range or if it's something they want to get away from.  No answer.  I think you get the picture.

The above being said: I do understand how frustrating it must be to be asked the same old questions over and over and over again ESPECIALLY when a forum member couldn't even be bothered to search the forums for an answer before posting and asking a question or before reading the manual.  Hell: if I had a few USD or GBP or EUR for every time I've answered a question on here re: standalone software to control these amps. well, then, I'd probably buy some more CODE amps.!!!  LOL!!!  Point is and all jokes aside: I do get it.  But it's no excuse for a lack of response on some very key issues (like those mentioned above).  And what's more: for some they're not asking for favors i.e. they're quite willing to help themselves but need a little bit of input (the Master Volume issue comes to mind here) and they just don't get that input.  And (back to the firmware issue): some are even prepared to roll back their firmware to a previous version as (apparently)  some issues were not issues in previous versions i.e. they're not even insisting that a new, immediate, firmware update with fixes is made available.  Fairer than that I don't think they could be.  But: no response (or, in some cases, a very non-committal response anyway).

In closing: I don't know if I'm correct in my assumption that Marshall isn't too interested in this CODE range of amps.  I also don't know if, maybe, this (perceived on my part anyway) lack of interest is because this particular market is quite tough nowadays (what with other modelling amps. and a plethora of plugins and the rest of the junk out there) and maybe the core business (the more expensive and professional products) is being conentrated on and these CODE amps. are just an irritation.  But you need to know this (as I have noted already): they are STILL Marshall amplifiers.  And there is nothing on the market (whether it be another modelling amp. or a plugin) that sounds like these amps. (or, at very least, comes as close to emulating the more expensive and professional Marshall valve amps.).  So they are actually something to be proud of Marshall.  Just bear this in mind going forward.

As I said: please read in the spirit in which this is being posted.

No response is necessary either.  But please do take cognisance of what I've posted above going forward.

Where i can find the code 50 manual?
CODE Manual

Hi everyone . I’m very new to amps, always played acoustic . I just recently bought the Marshal Code 25 . I printed off the operating manual . My question is I have a iPhone, iPad and a laptop . I want to play backing tracks through my amp so I can practice . I’m confused on how to connect to the amp . Do I need a special cable, and is the cable going to be a different one if I use my laptop ? And on the amp where is the best connection to use , I’m aware of the headphones plug guitar plug , which is best to play backing tracks through . Thanks very much .

Marshall code 100 - should it have come with a 2-way foot switch?

I recently purchased a new code 100 which was a display model. They didn't have the box for it or the owner's manual. I subsequently downloaded the manual off the internet. On one of the pages concerning the front panel functions it talks about the F/C jack socket and mentions "connect the supplied 2-way footswitch" but I never got one with  it. Has anyone recently purchased this model and did it come with a 2 way footswitch  for scrolling through presets? If so I will try and get one off the shop for free. If they argue their way out of it are they expensive to buy separately? **Update to this is that the manual I have downloaded has code 100 and code 100h on the cover so maybe the footswitch comes only with the 100h?

Hello Marshall Team, how can i update my Code 25 (displayed Version M1.4)? Have You any manual or so? Best regards, Ole
CODE Manual

Never use Code 100 head without a speaker?

In the manual is told not to use the Code 100 head without a speaker? Why?

I think it's not a valve amp.

The CODE Footswitch manual is not very informative.

I watched all the youtube videos I could find on it but I'm still confused on how some of the functions operate.

Can anyone provide me with a link to a more comprehensive document?

Everything that can be used for the good use of the equipment. 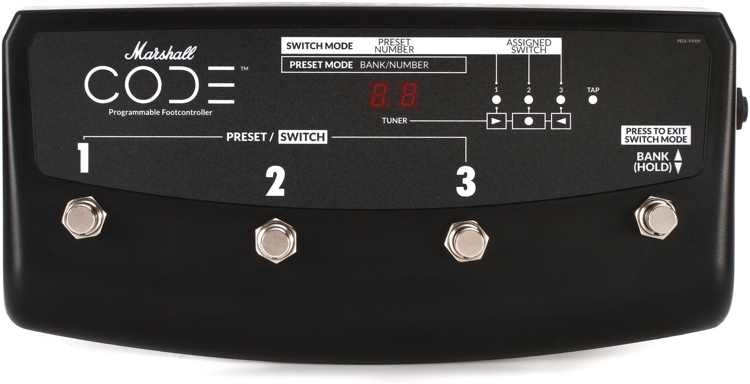 Please advise where I can download the latest version of the manual for the 25?

sorry but i have a other question!

i want to use the Turner with the Marshall Code Footswitch.

witch buttons on the Pedl i have to push to turn on the Tuner?

maybe i'am blind, but i cant find it, also dont find in the manual...

Hello, I just purchased the CODE 50 amp, and downloaded the Gateway app. I've only had about an hour and a half to play around with it so far. But I was unable to get the tuner in the app to pick up any sound. I have been out of the "scene" for quite some time and may be using it incorectly. Yet I can't find any help or manual for the tuner. Any help would be greatly appreciated.

Can not reset my CODE50 to factory defaults

I've read the manual.  This has worked before.  Tried it with my iPhone on and off.

Code 25 amp will not power on

I was recently gifted a Marshall Code 25 amp and i go to power it on (mind you i followed all of the intructions listed in the manual) and got no results. I tried a few different outlets thinking maybe my wall outlet was the problem but still got no power.

Hi there. Just bought a code 50, and I'm really enjoying it. A request! any chance of getting A dot icon on the speaker selection part of the app to show wether you are selecting a 4, 2 or one speaker cab, rather than havig to go to the manual to check.

Code 50 Does not respond when first turned on

My Code 50 takes 1-2 minutes to respond when I turn it on. Whether I am using the app on my iphone or if I don't have my phone with me and just want to use the manual adjustments. It is completely silent and unresponsive even though it is on and then magiacally 1-2 minutes later it becomes active. Any solution? Thanks.

HOW CAN I DOWNLOAD THE FULL USER MANUAL FOR THE AMP AND FOOTSWITCH?

Where can I download the Code 50 owners manual so I can get more from my amp?

I have the new Code 50 amp.  I was playing it and it suddenly went silent.  I noticed then the screen was on, so it didn't short out.  Looking into it more, I found the screen had stopped scrolling and all buttons and knobs are unresponsive. I tried (1.) turning it off, then back on, (2.) turning it of, unplugging it and waiting a few moments, plugging back in, then turning it bad on,  Still nothing. I've even tried the (.3) factory reset in the manual.  No avail.  I can plug my iPod into the line in jack and it plays fine, but all the buttons and knobs won't response. Please help!