After I updated my Marshall code 25to V1.41 , bluetooh can connect to my iPhone,but when I turn off my Marshall code,then open it again ,and turn on my iPhone Bluetooth , code’s blue light can’t auto light ,that mean I should forget pair and re-pair Bluetooth again,this is very very trouble to me .

So I push amp button and turn on my code  to try reset factory setting ， is defeated,is still V1.41,what should I do?please help me,how long can fix this bug?

The AMP does not connect via Bluetooth or USB, to handle the presets and for updates ....... what happens !!!

Hello, I have acquired the CODE 25, really an excellent amplifier, very versatile and very good presets. My problem and please I hope you help me to resorve it, is that even though I can connect via Bluetooth, I can listen to my tracks ....... the big problem is that when I want to use the FX or presets it appears that there is no amplifier connected ... (either from my android phone or my Ipad I ... I do not understand what the problem is.) Secondly, when I want to install the MARSHALL FIRMWARE UPDATE UTILITY, to enter presets or update the ampli, does not recognize the connection.I request guidance to be able to make full use of such a beautiful tool for my music.I use Widows 10 and G. Chrome.For your attention, thank you very much

One of the most potentially apepaling feature of the CODE amp system, the ability to change and store settings with bluetooth technology from my iphone, simply does not work. How does this sor tof problem reach ghe masrket in the first place. And MArshall's response, "We're working on it" for over a year is not reassuring.

Marshall:  How about an honest response like, "it can't be fixed" or "an update will be launched in the next 30 days" ?

When I download presets from the My Marshall website, how can I then transfer/import them to either the Gateway on my iPad, or to the Code 25 amp itself?

I can control the amp from the iPad, but it will only let me use the 99 presets already loaded.

I'm able to pair my iphone with code 25 amp. But when I get into the gateway app in my phone, the connect button doesn't show up. I try to connect the amplifier through "menu" -> "Code", but no amp shows up. Please let me know how I can fix the issue

I see that the Bluetooth issue I am experiencing has been going on for some time now. I just bought this amp but I wouldn't have had I known how frustrtating it was going to turn out!

The whole appeal of this amp was that I could sit back with my phone or ipad and diddle with the settings peacfully. But no, you can't do that becasue first  you have to pair the amp and phone/ipad EVERYTIME you want to use the gateway app.

Come on guys, really this is ridiculous. How many other people are complaing about this very issue. You can't sell a half baked product and not fix it. At very least allow us to roll back to the previous firmware.

Hi everyone . I’m very new to amps, always played acoustic . I just recently bought the Marshal Code 25 . I printed off the operating manual . My question is I have a iPhone, iPad and a laptop . I want to play backing tracks through my amp so I can practice . I’m confused on how to connect to the amp . Do I need a special cable, and is the cable going to be a different one if I use my laptop ? And on the amp where is the best connection to use , I’m aware of the headphones plug guitar plug , which is best to play backing tracks through . Thanks very much .

Code 50 Bluetooth set up with iPad

Probably been asked 1m times, but how do I set up link via Bluetooth with amp and iPad ?

Hi, I have successfully been able to pair my Iphone 5s to the Code 25 2 times now, and when I try to connect my gateway app to the amp, it never finds it. I've tried till I'm blue in the face, and they just will not connect to each other......frustrated!  TY

I have purchased new Code 100 (a demo from Sweetwater)  I am not able to connect the amp to my personal device.  When I press the Rev and Power buttons to connect,  the blue lights flash,  the device number shows up on the amp but either of my devices (an I Pad and an I Phone) will not recognize the Code amp.  The Code Amp does not show up in the "My Devices" so it never has the opportunity to pair or show up as connected .   My phone and Iphone recognizes other bluetooth items, ie, head phones, speakers etc. I have tried the FAQ suggestions and have tried the recommended fixes and I am still not able to connect.

I have not done a firmware update on the Code 100.

Any assistance would be greatly appreciated.

Connecting my phone to a Code 50

It seems that my phone is connected via Bluetooth,

only  a scan for amps block and this does not do anything. 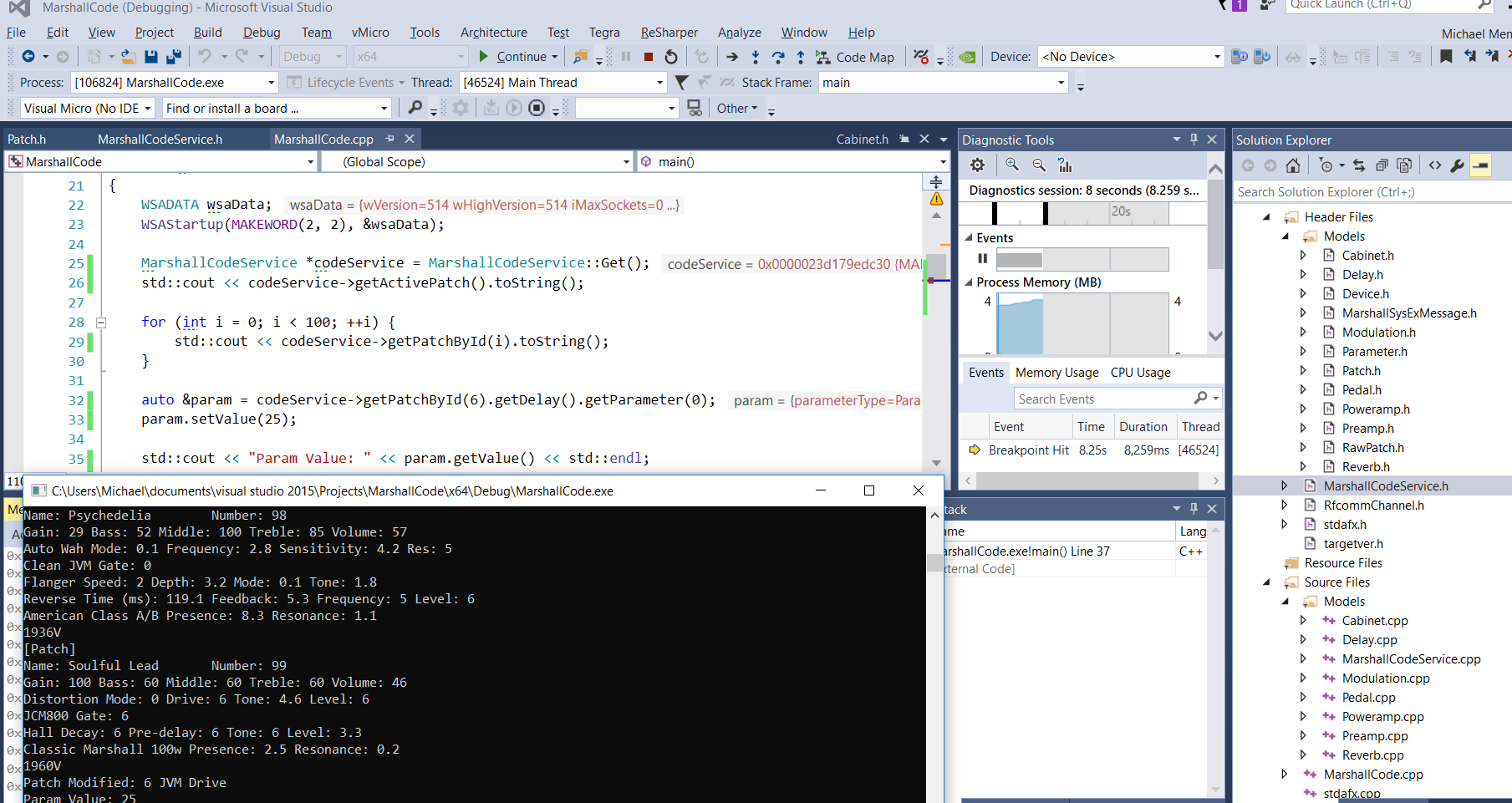 Gateway is not locating my CODE 25

I need some help with the Bluetooth connectivity.  I hold down Reverb/Power on the amp turning on the Bluetooth feature and I tell Gateway to Scan for Amps and I get nothing.  My Iphone Bluetooth is on.

I played my code amp yesterday and had it connected to blue tooth to my ipad and it went flawlessly.

I just updated the firmware and now I can't connect .

is it the update that is the problem?

Code 50 bluetooth not working with iPad

I have an iPad 2. I can connect my Code 50 via the iPad's bluetooth settings. It pairs perfectly fine. But when I try to connect to the amp in the Gateway app, nothing happens. I can't see the amp and can't connect to it. Is there a fix for this?

Code 50 - Saving Presets onto the App

I just bought the CODE 50 and like it alot; I also have the GATEWAY APP on my phone.

But I needed something very small for some of the tiny gigs we do; and I feel the CODE has better "Sounds" than my Fender Mustang GT - was using)

(Basically I'm afraid if I do it wrong; I'll restore the Factory Presets onto my Amp and all my work will be lost!)

-AND; if I do that; will MY PRESESTS  stay in my "APP"; even when the Amp is turned off and not connected to App?

Please let me know and thanks  (and any other Suggestions or INTEL!)!

My CODE 50 will pair with my iPad, after some difficulty.

However, all it does is let me hear my email notifications through the CODE! It will NOT pair with Gateway ever!

This is a big deal because access to the amps controls is impossible without a remote connection. I'm sorry, but the control layout is a POS if you must rely on the amp interface. Who sits on their amp when practicing or gigging? The top position was a TERRIBLE IDEA! Fire the idiot(s) who came up with that disaster! The Bluetooth MUST WORK AND BE RELIABLE in order to make this amp useful!

I have followed your tutorials and cannot waste 30+ minutes monkeying around with this junk every time I attempt to use it! I have even deleted and re-installed Gateway with it paired with the ipad with no change.

Look, I don't care if you have Jimmy Page locked up inside this thing, if you cannot offer a solution for the Bluetooth issues, it's going in the bin!

I traid pairing with iPhon7 ios 11.2, this works well, can use gateway app with success.

If I switch off BT on my Iphone and later switch on BT, BT connection establishes again and gateway app works.

If I switch off power code25 and later switch power on again, BT connection doesn't come back, no blue led on code25.

According FAQ BT should come back on code25 with same pairing code to re-estrablish the previously paired BT connection.

As workaround I have to delete the BT Device from my iPhone and start BT on code25 (keys REV/POWER on code25) with new pairing.

Is this a known issue ?

Thanks and best regards,

Music will not play via bluetooth

I am connected to my Code 100H via bluetooth and using Marshall Gateway app and trying to play a song using the playback feature and the song will not play. My music library was found and I can pick the songs ok and they appear in playback, but will not play. I just wonder if this has anything to do with Apple Music?

I am using my Ipad and also tried with my Iphone 7.

This amp sounds nice, and I really want to play with the tones, but I lack a compatible phone for it. I have an LG stylo2,  but I also have two macbooks, an imac, and hackintosh. I even got the bluetooth to work on the hackintosh. The play store keeps giving me the error that "my device is not compatible with the software." Followed the instructions to get it on, but to no avail. So, I'm stuck hoping that Marshall gets the message and develops some iOS software for this thing. So, what do you say?