AS50D - What level signals are the 'Send' and 'Return'? Line Level?

Just a basic question. Wondering if the fx loop in the back of my amp was Line Level. Is this universally true? Are all fx loops line level?

Is this normal for this amp, or mailfunction? 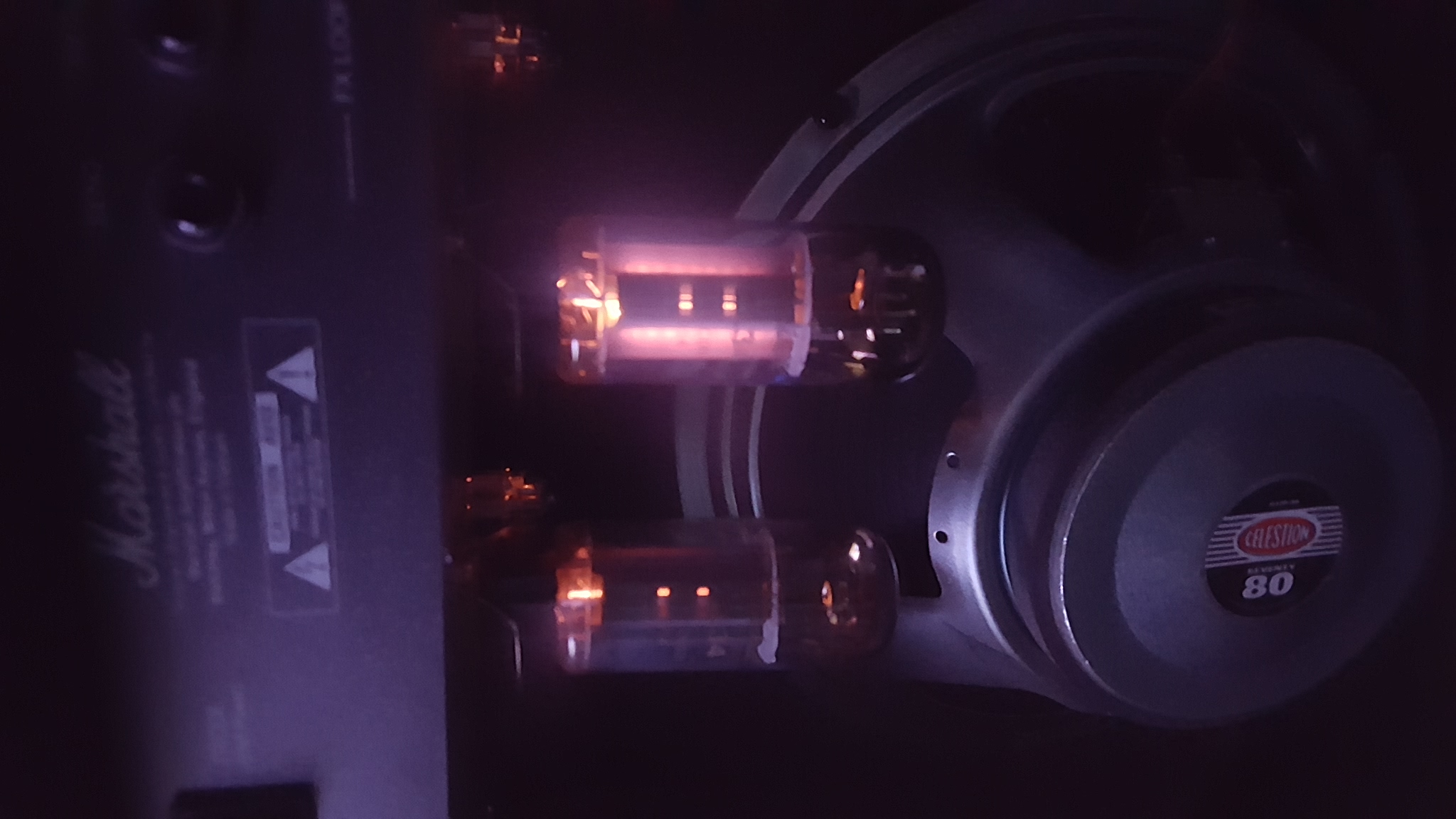 One of my power valves is redplating, and prior to that there was a really loud sound coming through the sneaker that sounded like an electrical surge. Is it just a new valve required or something else. At first there was a noticable hum,  then I went to plug in my guitar and as soon as I picked up the cable, it made that loud bzzzzzt sound and I shut it off. I then tried it again and noticed the redplating.

I cannot get connect to my code 25 amp via bluetooth.  I have followed reset instructions on the forums here, no luck.  I have an iphone 6.  My bluetooth sees the code on my phone but will not connect to it.  Sent message two weeks ago to Korg/Marshall.  No answer.  Time to find a new amp.  Hi Fender how's it going?

Hi&Hallo for everybody !
I'm looking for setup to play that kind of sound (or clouse enough):
https://www.youtube.com/watch?v=cjbtbNXQ0_Y
- Someone knows preset setup to get similar  sound (code25)?

Hi there, what is the correct cabinet for the jtm45 head? thanks

like everyone else my iphone 6 will not connect via the Gateway app. i downloaded the new firmware and re-installed the app but nothing......Marshall, please help! if anyone has a solution i'd love to know what it is?

Gateway will not find amp, CODE 50

I just bought this amp yesterday after flirting with a Blackstar HT20 and realising I wanted a Marshall again. Well, starting to wish I hadn't bothered.

Like so many others, I can get my phone (Samsung Galaxy S5) to connect to the bluetooth and actually play music through the amp. BUt Gateway will not find the amp within the menu. I've tried all the uninstalling Gateway, reinstalling, updating the amp's firmware - even tried using my daughter's Samsung S4-mini which again, connected to the audio but will NOT FIND THE AMP!

I have a Samsung Galaxy Tab 4 which is a good wee tablet but apparently isn't compatible with Gateway.

Seriously. So I have 3 different devices and not one of them can connect to my new amp.  Clearly this is a fault with the amp itself since the same thing happens with two different phones.

Please don't tell me to go through that long list of uninstalling, reinstalling, removing the bluetooth device and reconnecting etc etc. I've been doing all that since I got the damn amp yesterday afternoon. 24 hours later and none of it has worked.

Is it at all possible this is going to be addressed SOON in either a Firmware or Gateway update? Clearly, if the amp is faulty I will need to return it soon to get my money back but, honestly, I'm loving the sounds I'm geting with the presets, I just want to edit them rather than all the hassle of returning the amp to the shop!

I saw a review on the Google Play Store for the Gateway app from a guy in June 2016 - that's 7 months ago - and he was having the exact same issue. So if it's not been addressed in all that time and Marshall are still sending out these faulty amps, what hope for a fix? Please tell me there is one!

Has anyone purchased a CODE 50 brand new without any issues?

I bought a Code 50, brand new out the box. Runs perfect! No firmware upates have been applied. It plays great, sounds great, and does everything as advertised. Am i the only one that got a Code 50 thats not having issues. I also have a Boss Katana 100 2x12, and I think the Code 50 sounds way way better to my ears.

After the firm update it is impossible to connect between Gateway and the Code 50.

It is very annoying! I played a jcm 2000 tsl head and a jcm 800 head and i bought de Code 50 precisely for the possibility of a bluetooth connection!!

I saw a lot of the same questions, but never a answer back from Marshall..... that's make me sad.....

Hope for a answer...

I have just bought one of these cabs - Is it possible to fit casters and if so which ones and whats the best method?

Like many of lucky owners of Marshall Code 50, I also have problem to pair Gateway app with Code. My phone (Ulefone Power with Android Mashmallow 6) recognize amp thru bluetooth and even play MP3 music, but can't work with Gateway. I wonder why ? I tried to rebooth code and phone several times, also install and uninstall app few times, but nothing helps. I upgraded firmware on my Code 50, still nothing. Can i expect fixed new version of gateway soon, and will it be tested on more smartphone brands ?

Of course it doesnt have a master volume.

Has anyone any experience, good or bad of putting an attenuator before the speakers?

I want to keep the tone but redue the volume!

Where do I register my guarantee on the web page please?

Where do I register my guarantee on the web page please?

Hello, i've noticed that the the when the power amp is on (doens't matter which one) that it seems to make a crackling noise.  It is hard to hear when playing, but when you let a chord or note ring out it is noticeable.  I have determined that it is the power amp function as when I disable it the noise goes away.  Is this normal as it is modeling power valves or is there something faulty?

hi guys im wanting a new amp to go with my new les paul however i dont know which one to choose i dont want to go too expensive its just to practise with my band in the garage. i want an amp that has a heavy and deep sound to it if you have any suggestions plz comment. also go and subscribe to my youtube channel at www.youtube.com/Reevesy vlogs

Power light going on and off mini jubilee head

The power light started to go off and on on my  mini jubilee head today no pattern to it seems random . Has anyone else encountered this

Amp on clean channel super loud, when on distorted channel need to crank to half or more to equal clean on 1/4 setting, low gain 2 or 3, tubes or owner issue? Is this normal, kick in overdrive distortion goes through roof, in a good way. Loudness not like clean channel. Thoughts or suggestions, thanks in advance.